UKube-1 is the UK Space Agency ‘s pilot programme to design and launch a (3U) CubeSat – a miniaturized (30x10x10 cm) satellite that will enable the UK to demonstrate new technologies in space. UKube-1 was designed and built by Clyde Space Ltd in Glasgow and will be the first Scottish-built satellite to launch. FUNcube-2 on UKube-1 is a follow-on project and comprises of a set of FUNcube boards that is flying as part of the separate UKube triple cubesat and it has identical goals. The spacecraft will carry three experimental payloads and, additionally, AMSAT-UK have been asked to provide a set of FUNcube boards. These will form the Educational Outreach that is part of the Mission Requirements and will also provide a redundant communications system for the satellite. In addition to the FUNcube payload, the other UHF/VHF radio transceiver that is being used on UKube also has a “loopback” mode of operation available for use after the end of the main mission. This mode provides a bent pipe FM to DSB single channel transponder for amaeur use, much as AO16 has done previously.

With regard to the AMSAT-UK FUNcube-2 sub-system carried by the satellite the UKSA say:
“As well as providing a fantastic opportunity for innovative UK companies and UK academics to collaborate on a national space project, UKube-1 is also useful for training the next generation of space engineers and includes an education payload intended to support STEM initiatives. The payload consists of a tiny radio transmitter for science education and a materials science experiment from which school students can receive data which can be compared to results obtained from similar reference experiments in the classroom. The system, funded by volunteer members and friends of AMSAT-UK, is called FUNcube-2.”

Read the full story at here .

The next 6 bits will be transmitted MSB first and will indicate one of three main frame types, also which frame in the overall transmission sequence is currently being sent. Mainframe types:

Although not a frame type in its own right as it is included with all frames, the real time information sends the state of all channels from the EPS, AMAC, RF, PA, software systems.

This is the science bit, intended to provide all the information required for the material science experiment. The data will be sampled once per minute for 104 minutes. The main focus of the data is the four analogue temperature readings sampled at the full 12 bit resolution, these coupled with the solar array temperature readings should be enough to conduct the experiment. Also included are data on the three batteries, current, voltage, temperature. These will be a good indicator of the overall power state of the satellite over the course of an orbit.

The purpose of the high resolution data is to be able to look at the tumbling rate of the satellite. This can be calculated by looking at the output from each solar array at a relatively high sampling frequency. Thus the data collected is voltages from 6 solar arrays, together with the battery currents, sampled once per second for a minute.

These are the text messages received via DTMF from ground stations to be periodically retransmitted. Messages will not be broken up and sent over multiple frames, so the maximum length of a message is 200 bytes. The format of messages is transparent to the satellite, each received message will just be copied out verbatim. Messages can uploaded to one of nine possible RAM slots or to one of ~27 FRAM slots, with the slot id specified at upload time. After an upload attempt status bits in the Real Time Telemetry will be set to indicate the slot id and success or failure. An authentication (not encryption) scheme will be used to verify message validity. 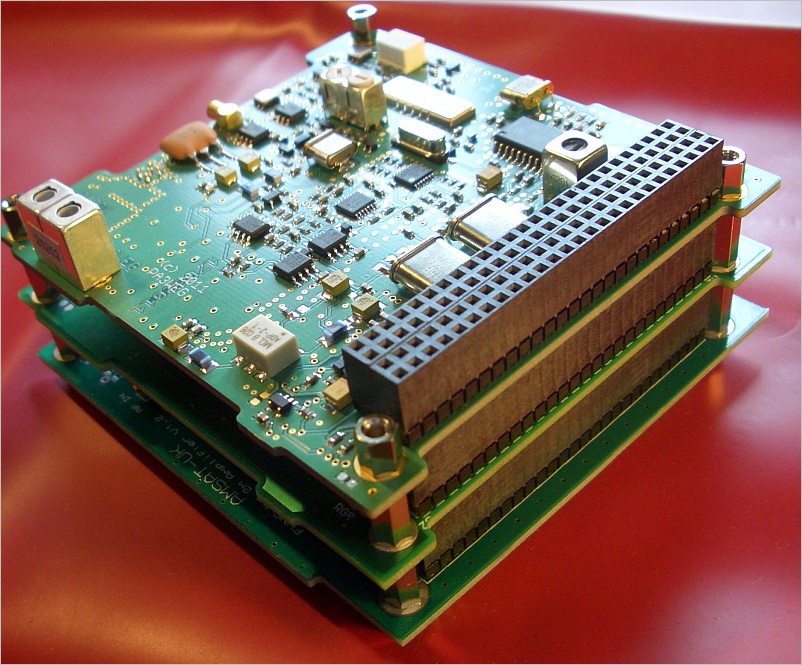 The FUNcube-2 on UKube EM stack