FMN-1 is a 3U CubeSat with deployable solar panels. The main mission of the satellite is that new component experiment. FMN-1 will also serve as a repeater for amateurs worldwide via the onboard transponder system. The peak power of FMN-1 is 15W which is provided by deployable solar array. The capacity of the Li-ion batteries is 15 Wh. The FengMaNiu 1 CubeSat was developed by Link Space Aerospace Technology to test out a series of new components including a pair of miniaturized panoramic cameras for still image and video collection. It will also serve as a repeater for the worldwide amateur radio community.

FMN-1 – different information than we have ….

China’s first private satellite – Fengmaniu-1
Along with the Zhangheng-1, China’s first private satellite Fengmaniu-1, which is owned by Feng Lun, chairman of Vantone Real Estate, was sent into space.
It is also the world’s first panoramic-view satellite. Equipped with a 4K high-definition panoramic camera, the satellite is able to provide 360-degree HD photographs of space. The satellite will pass over China three times a day once it enters orbit, allowing for real-time transmission with the Earth. According to Feng, the satellite will be used to expand the boundary of media as users will be able to receive images and audio directly from the satellite. To increase teenagers’ interest in aerospace, the Fengmaniu team will also cooperate with domestic space education organizations to create lessons based on signals from the satellites.

The satellite is as large as a shoe box, and weighs 4 kg. Its efficiency is 8w, and it is equipped with 4-k cameras. The satellite can demonstrate panoramic view of the space. It costs about $1 million to make this satellite. Carried on CZ-2 rocket, the satellite was launched into the orbit which is 500 kilometers high in the space. In the future, the satellite will transit China three times a day to transmit images and audio in real time.
According to Feng’s initial bold ideas, the satellite could make live broadcast in space and explore new ways of media. “If we have a satellite in the sky and can live broadcast Moonset Eclipse on February 1 and let audience pay for watching it. It would be very profitable,” said Feng.

About two year ago a very rich guy named Fen Lun, the president of a holding company, asked a space company to make and launch a “private owned satellite” for him, without a specific task requirement. Then a projct team was formed by the space company during the design and fabrication period, and BA1RB, an well respected ham in China, was asked to be the leader of the design group. It was decided the only payload of the craft will be a FM voice repeater and a digital camera controllable by radio amateurs, so this plan was said ok by CRAC.

However, later the amateurs were not be abled of participating during and after the launch stage, so the parameters of telemetry have not been abled of published as planned, and it seemed the amateur payloads were never turned on, and the another company (Zero Gravity Lab) who made the radio board inserted their commercial name into the beacon. Those made the satellite has no working amateur service component at all. In addition, Mr.Fen, the “owner” of FMN-1, publisized a lot of sensationalizing nonsense regarding “private satellite” on different medias, and spreaded incorrected concept about radio and satellite administrations.

Since the launching day of FMN-1 the domestic criticism has been risen in amateur satellite community, and as well the complains were submitted to the administration and have brought its attention. In the middle of March, the radio administraion issued a written “notification of order to make correction in FMN satellite network” to the “Link Space Aerospace Technology”.

However, I have not heard if they have replied to the admistration nor the report of their reaction yet.

By the way, the name FMN-1 sounds funny in Chinese. A popular chinese saying for the things which has no relationship inbetween is “wind, horse and cow” (not related as wind horse and cow). The full Chinese name of satellite FMN is just “Feng (wind), Ma (horse) and Niu (cow)”.

Similar to some young satellite people (including some newcommers in amateur radio) in today’s China, the key team members of FMN-1 are new for both space and radio, that brought continuous changes in the short project time.

The FMN-1 actually has two radio modules, for T&C (originally designed for FM-repeater and T&C) and store-forward data transponder respectively, either works in schedul. The T&C is designed to transmit beacon signal on 435.350MHz in every 10s. But it was found in the initial test that the beacon transmission was not stable, so it was changed to send a longer fixed data block ever 30 second for tracking and capturing. The store-forward data transponder is of home made and designed for digipeating and also send back the 2 million pixel camera image. However, it was found the total power supply was only enough for the platform houskeeping job, and the transmission of this home-made module would cause the whole system re-started, so this module can only be kept in shut off mode, at least so far. Because most components of the satellite are newly developed, till now the platform testing by the fabricator has yet not been stabled and finished.

China launched a Long March 2D rocket from the Jiuquan Satellite Launch Center on 02 Feb 2018, carrying a group of seven satellites from China, Italy, Argentina and Denmark including an innovative experiment to study the ionospheric precursors of Earthquakes to evaluate whether forecasting of strong Earthquakes will be possible from an orbital vantage point. The launch occurred at 07:51 UTC from Jiuquan’s Launch Complex 43 and the two-stage rocket was headed to the south west toward a 500-Kilometer orbit from where its payloads will operate. 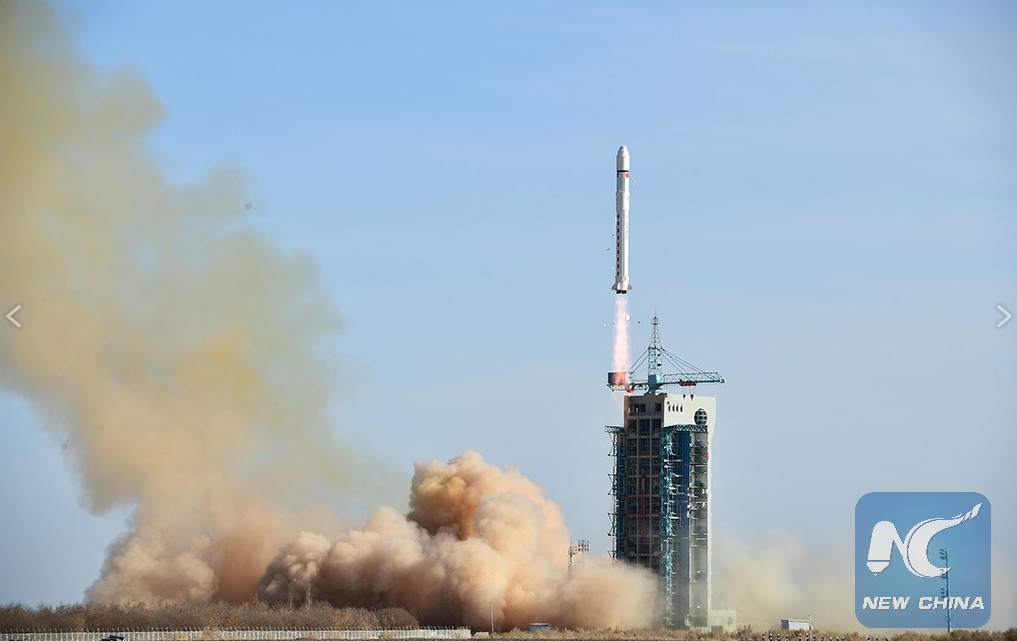